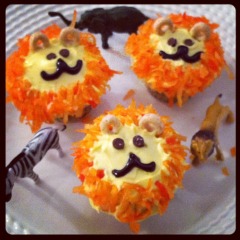 March comes in like a lion and goes out like a lamb. How come it’s almost the end of March and it still feels like the lion pa

rt of the month outside? Actually, this picture is what it would really feel like if a pride of lions were waiting outside. However, they look a lot warmer than we do in NYC! Either way, these lion cupcakes are a perfect treat to make for a friend’s birthday during March.

And if your friend doesn’t like them, I have a feeling this hungry lion would gladly finish them up!