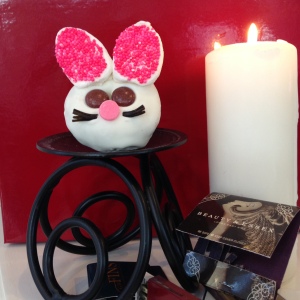 Why am I so addicted to having fun with this little bunny donut?

Acting as a pseudo psychologist, I’m examining my childhood. Growing up, I could never have a furry pet because my father was “allergic” to animals. After numerous lazy goldfish who just floated on their backs in the fish bowl or other athletic fish who enjoyed jumping out of the bowls, my parents finally got us a cuddly pet.

To be specific, my parents broke down and came home with a cute white bunny. We called the bunny Snuffy , a compromise between Snowflake and Snowpuff. When my sister and I went to camp, my mom had the job of feeding Snuffy. However, as time went on, Snuffy began to bite my mom. When we returned from camp, we learned that Snuffy was sent to a “farm” so it could play with its friends.

Many years later we realized that Snuffy may have joined its friends at a different sort of farm. More like a farm to table destination. Perhaps Snuffy is playing with friends that were part of Wolfgang Puck’s ‘Braised Rabbit and Fava Bean Fettucine’ that was posted on Wolfgang Puck’s Twitter account earlier this week.

Whatever the reason, I’m having fun with our little white bunny donut. I hope you’re grinning along with us.

See instructions under “Show Me the Bunny” to create this donut.